Over 80 representatives from IURC pilot cities in 20 countries participated in the 1st thematic webinar “Addressing Climate Change Effects in Cities”. The event focused on nature-based solutions (NBS) and green infrastructure measures implemented by cities in Europe, Asia and Australasia to mitigate heat island and heavy rainfall events. It was moderated by Megan Chow, Country Coordinator of the IURC team in Korea.

The webinar took place against the background of severe climate change effects around the world, from the unprecedented, deadly flooding in parts of Europe and Asia, to the record heat waves that have caused massive, overwhelming wildfires in the summer of 2021. Considering the impact of such disasters in cities, this webinar encouraged in-depth discussion on nature-based solutions to address urban heat islands, and on water retention infrastructure to manage heavy rainfall and flooding risks.

On this occasion, cities’ experts from Korea, Japan, India, Malaysia, Ireland, Italy, Spain and the Netherlands shared views on challenges they face and solutions they are implementing. The exchange inspired IURC pilot cities to capitalize on experiences showcased and transfer knowledge to their own circumstances.

The event – which dealt with two types of climate hazards, i.e. urban heat islands and heavy rainfall/flooding – was opened by Ambassador Geunhyeong Yim, CEO of CityNet. Mr Yim noted that increasing climate resilience remains a core action of cities in Asia to achieve the SDGs. Since rising temperatures cause extreme weather events in cities across the globe, knowledge exchange and global cooperation have become crucial to implementing hands-on solutions, he said.

John Bogaerts, Deputy Head of the European Union Delegation to the Republic of Korea, emphasized the EU’s commitment to supporting global climate action through programmes like the IURC, the EU-Korea Climate Action and the Global Covenant of Mayors for Climate and Energy. He specified that the EU has itself committed to achieving carbon neutrality by 2050 with the EU Green Deal as a key policy instrument to achieve this goal. Nature-based solutions are instrumental to protecting and restoring natural ecosystems in cities, which is also a pillar of the EU 2030 Biodiversity Strategy, he said. The EU supports research and innovation on climate action in cities especially through the Horizon Europe programme, which looks at achieving carbon neutrality in 100 EU cities by 2030, Mr Bogaerts said. He shared a video of the European Union’s Climate Neutral and Smart Cities initiative. 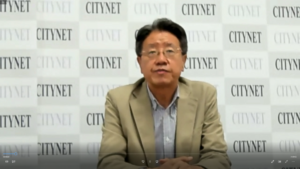 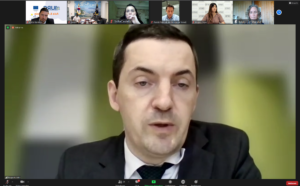 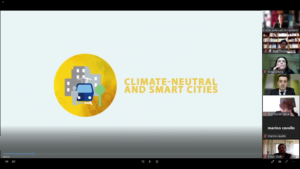 The webinar included two panel discussions dealing with nature-based solutions (NBS) and green infrastructure to confront urban heat islands and storm rain challenges. Pablo Gándara from the IURC project introduced the webinar goals, i.e. to foster cooperation between EU and non-EU cities to address urban heat islands and heavy rainfall/flooding as well as to identify potential pilot areas and stakeholders to address these challenges on a city level. He mentioned that greening cities remains a challenge also in Europe, where many cities have lost green spaces, mainly because of unsustainable urbanisation. Cities have the means to counteract as local authorities are responsible for planning and investing in urban infrastructure, he said. Mr Gándara referred to a recent publication by ESPON focusing on green infrastructure in urban areas, which indicates the choices local authorities have concerning the nature of infrastructure construction, renewal or expansion.

Panel session 1 dealt with green infrastructure and urban heat islands. Won-Ju Kim from the Seoul Institute in Korea focused on the rooftop garden projects of Seoul City, stating that buildings with a rooftop garden showed a temperature of 3.1 Celsius lower than other buildings. Mr Kim mentioned that between 2002 and 2020, 764 green roofs have been built with a total size of 7,140 m2. Since 2021, Seoul City increased subsidies from 50% to 70% for over 1,000 green roof projects. The target for 2021 is to promote the creation of 9,000 m2 of green roofs in 23 public buildings, he said. Mr Kim stated that there is a need for cooperation and coordination between related city departments on the creation of a method suitable for the target site. Also, monitoring after construction is required, he said.

Sofia Castello, Lead of Environmental Resilience Community of Practice at Think City in Penang (Malaysia), introduced the comprehensive Climate Adaptation Programme (CAP) of Penang (the first of its kind in Malaysia) and shared examples of nature-based solutions to reduce climate change impacts. Due to the high increase of George Town’s temperature in the last 32 years (on average 1.5°C), Penang State has developed a comprehensive, science-based CAP based on NBS to reduce temperatures and flooding. The CAP has also developed special measures for vulnerable communities, institutional capacity building (including a knowledge management platform), and a disaster risk board. Ms Castello introduced the grants programme which is currently supporting 20 pilot projects for the cooperation with private owners. The main green infrastructure project is the street trees, which block the radiation from reaching the city hard surface, thus reducing the urban heat island effect by 2-6°C.

Imanol Zabaleta, Director of the Center for Environmental Studies of Vitoria-Gasteiz (Spain), introduced some examples of the city’s continuous climate action in the last 30 years. Vitoria Gasteiz has been internationally awarded the European Green Capital Award (2012) and the Global Green City Award (2019). Mr. Zabaleta explained the main climate challenges and to green infrastructure solutions implemented by Vitoria Gasteiz. The strategy consists of over 100 projects to strengthen the network of green areas in the city, including the green belt and ecological urban corridors. One of the main challenges is to include the citizens’ participation in the maintenance of the green infrastructure. Herefore, several actions are currently piloted in the historical city center. Mr Zabaleta explained some next steps including the naturalization of school playgrounds and the introduction of visualisation tools for citizens.

Elisa Spada, Gabriele Meluzzi and Marino Cavallo introduced some best practices from Bologna and the Nuovo Circondario Imolese (Italy). Elise Spada from Imola municipality presented ‘Imola Verde’, an innovative map showing over 40 green spaces owned by the municipality. Imola municipality focuses on these green areas as public spaces to mitigate the heat and to support sustainable mobility in the historic center. Marino Cavallo from Bologna Metropolitan referred to the reforestation of industrial areas by creating eco-industrial parks as well as in the Imola racetrack and motor valley. Gabrielle Meluzzi, Mayor from Fontanelice, focused on the urban regeneration of elementary and middle schools, emphasizing the participatory planning process. He also referred to the Roots for the Future project by Emilia-Romagna Region for planting of 4.5 million trees from 2021 to 2025. They focused on building public-private-partnerships.

The second panel was moderated by Jens Bley from the IURC team and dealt with urban flooding. Cheol-woo Jung from Busan (Korea) explained the city’s core flooding risks caused by an increase in maximum hourly precipitation and sea-level rise. Busan faces insufficient drainage capacity due to aging pipelines and an increase in rainfall due to climate change. The city has developed several infrastructure countermeasures including water pipes securing and installing rainwater runoff reduction facilities (with drainage pumping stations and rainwater reservoirs). Mr Jung explained some soft, non-structural measures, including an improved disaster response system, an integrated management system for urban flooding, the inclusion of artificial intelligence for disaster prediction and providing real-time information to citizens (including maps and smartphone apps). Mr Jung referred to further infrastructure measures including the facilitation of water circulation by decreasing runoff on the surface and increasing permeation into the ground.

Vishal Shah from Surat (India) introduced the Water Plaza project promoted by Rotterdam City and Surat Municipal Corporation within the 100 Resilient Cities and the IUC programmes. Due to the increasing population of Surat (7 Mio. inh.) and the concentration of heavy rainfall in three months, the city is yet not able to store water rainfall and decrease flooding risks, he said. The Water Plazas, which are projected for 8 areas across the city, are designed to be used as water reservoirs in heavy rain periods and as activity plazas, sports court and recreation grounds for the neighbourhood during the remaining part of the year, Mr Shah explained. Moreover, during festivities, the plazas may serve as artificial ponds for emersions of idols and offerings, thus, saving river pollution. Through the cooperation with Rotterdam, Surat has been able to exchange knowledge and receive support in design and innovation measures.

Mary-Liz Walshe and Neil Higgins, Dublin City Council (DCC) introduced challenges and opportunities to use nature-based solutions to manage flooding in Dublin (Ireland). Ms Walshe focused on the Camac River Flood Alleviation project, which aims at restoring the natural path of the river, which – centuries ago – was canalised through the city for power production, causing continuous flooding episodes. Under the water framework directive, DCC has developed a plan for re-naturalising the river corridor and a river catchment plan which may lead to keeping surface water at the surface to capture benefits to biodiversity and recreation, and reduce the pluvial flooding. Neil Higgins from DCC referred to the introduction of rain gardens into the streets of Dublin centre areas to capture and store rainwater, thus reducing flooding risks and increasing biodiversity. Dublin is attempting to introducing these measures to greening the city.

Corjan Gebraad from the City of Rotterdam (Netherlands) mentioned that 70% of the city area is below sea-level, which leads to challenges of dykes’ maintenance and permeable pavements. Heavy rainfalls and storm surge lead to flooding events, causing severe damages to city infrastructure and housing. The city thus designed water plazas to use public space in a more efficient way to store water temporarily. Also, underground water storage infrastructures have been developed. In general, Rotterdam is implementing a sponge city approach, to infiltrate water into the ground. Dykes and levees have been integrated into the city landscape, Mr Gebraad said. Greening has a twofold purpose, to relieve heat stress and to improve water retention, he concluded.

Toru Omiya from Nagano Prefecture (Japan) shared challenges the town of Obuse has experienced since severe flooding in 2019 because of a strong typhoon. Solutions included the development of water storage systems with including NBS like natural levees and agricultural reservoirs. As a further crisis response action, communication among stakeholders along the river has been strengthened and action plans in case of flooding have been developed. Mitigation measures include the protection of essential infrastructure as well as the development of hazard areas maps with public shelters. Also, citizens have been trained through neighbourhood associations. Sharing information and cooperation among all stakeholders is crucial to reducing flood damage.

The project team will distribute to cities participating in this thematic cluster a matrix of possible areas for potential subgroups and pilot actions. Cities will be invited to exchange information and implement pilots in areas, including: 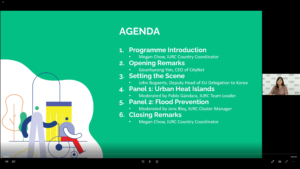 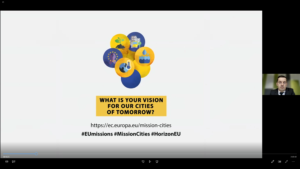 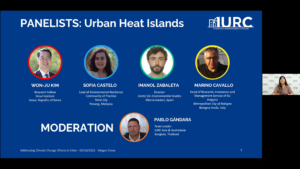 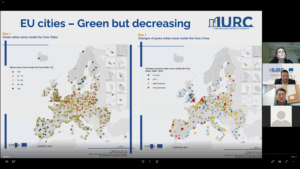 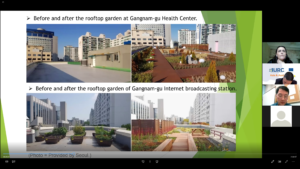 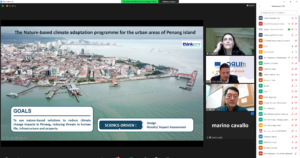 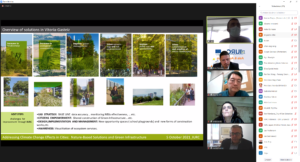 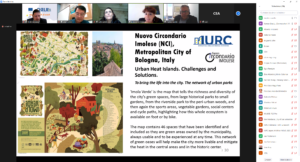 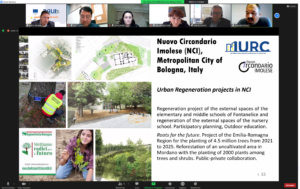 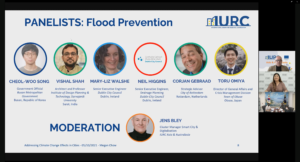 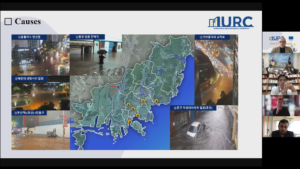 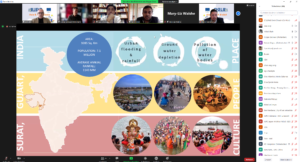 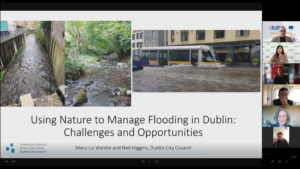 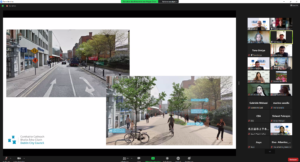 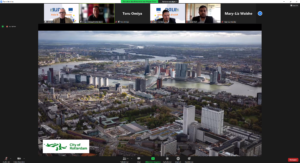 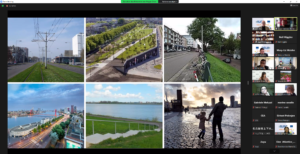 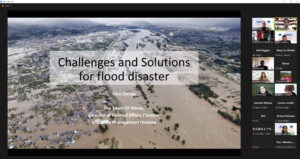 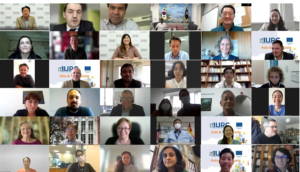