“I was asked to participate in the trip as a member of the 4-person delegation from Ostrobothnia part of the International Urban and Regional Cooperation program (IURC Latin America) funded by the European Union. During the visit I had the opportunity to present the work that we have done in the H2 Ecosystem Roadmap for Ostrobothnia -project to municipal and regional decision-makers and discuss the importance of ecosystem collaboration for developing carbon neutrality agendas.”

Read the fascinating blog post by Kaisa Penttilä about Otrobohtnia’s experience in learning about renewable energy during their just finalized visit to Magallanes.

Here you can find the link to the blog post: https://blogs.hanken.fi/research/2022/11/24/the-green-transition-needs-collaboration-across-the-world/

The region of Magallanes and the Chilean Antarctic welcomed the delegation of the Ostrobothnia region as part of the second phase of the International Urban Cooperation Programme, which aims to lead and develop a form of decentralized international cooperation in matters of regional innovation.

“Despite inhabiting the two edges of the world, the regions of Ostrobothnia and Magallanes share many similarities that build good grounds for collaboration, sharing experiences, and learning from each other. Some of the similarities between the regions include the huge wind power potential that is due to advantageous weather conditions, high international interest in investments for hydrogen and e-fuels production, good possibilities for logistics in terms of sea transport including several existing ports, quality higher-level and university education, and ability to leverage local expertise for developing the energy sector.

Differences between the regions are evident in for example the focus of expertise in the local universities and the maturity of the green transition in general. The region of Ostrobothnia and its industry clusters have, for example, extensive experience producing different components for energy solutions for global markets and project management of power plant construction projects. The region of Magallanes on the other hand has traditionally been a producer of oil and gas as commodities and has expertise both in these production technologies and logistics as well as the infrastructure related to these commodities.

The Ostrobothnian energy system is already to a high extent based on renewable and carbon-neutral energy sources. The Magallanes region on the other hand is very much dependent on fossil gas and oil for its electricity and heat production needs. There are also differences in the maturity level of triple-helix or cross-sector collaboration to develop the green transition in the regions, Ostrobothnia having more experience in building the ecosystems of partnerships that need to collaborate on realizing the visions that are planned for.

The strongest connecting theme of interest for the two regions is the opportunity to have an important role in the green hydrogen-based energy transition driving the world toward adopting more carbon-neutral energy solutions. Possibilities exist both for the businesses in the regions as well as the local societies as a whole to achieve an advantage by building up the local competence level and claiming a stake in the emerging hydrogen economy. Regional business actors can become global exporters of e-fuels, energy system solutions, or their servicing, with green hydrogen as a key component in the solutions.”

“A highlight of the study visit to Magallanes, Chile was the excursion that was made to the demonstration plant Haru Oni, a real-world concrete case example of producing e-fuels from wind, water, and air with the purpose to decarbonize the transport sector.

HIF Global (Highly Innovative Fuels) and its side branch in Chile announced the construction of the world’s first integrated commercial-scale carbon-neutral synthetic methanol and gasoline production plant, named Haru Oni in 2020 and are at the moment in the final months of the completion of its construction. HIF Global was originally founded in by the Chilean Association of Power Generators (AME) and supported by the German automotive company Porche AG. After years of extensive research and by getting on board key players in the industry, the company was ready to launch its first demonstration plant project in Chile, in the region of Magallanes, where the conditions of producing wind power on a massive scale to a highly competitive price in global comparison are eminent.

In the first phase the demonstration plant is composed of one 3,4 MW wind turbine and a 1,2 MW PEM electrolyzer from Siemens Gamesa. It will be using direct air capture technology from Global Thermostat and a methanol synthesis reactor based on Johnson Matthey’s design supplied by MAN. Finally, the solution also includes a MTG (Methanol To Gasoline) plant that will convert the green methanol to synthetic gasoline provided by ExxonMobil. The plan is to grow the capacity of the plant from the demonstration phase, where the e-methanol production will be around 750,000 liters per year,to potentially 1,000,000 tons of green methanol per year that could potentially be produced by 2026. The Haru Oni plant is only one of the several hydrogens and e-fuels plants that are at the moment planned and prepared for in the region by different commercial actors.

The visit at the construction site of the plant gave highly valuable insights on the development process of a first of its kind e-fuel demonstration plant: The integration of different technologies and the optimization of the plant operations through a learning process requiring testing of the planned design were some of the topics discussed. Key success factors for the completion of the demonstration plant included leveraging the extensive experience of the actors involved in the gas and power production sectors, inter-cultural communication and collaboration skills, and building a highly professional team of co-workers who know what they are doing. The inclusion and dialogue with the local community as well as the close connections and collaboration with the research and education institutions in the region were also taken up as examples of how the demonstration plant project has connected with the local stakeholders in the region.” 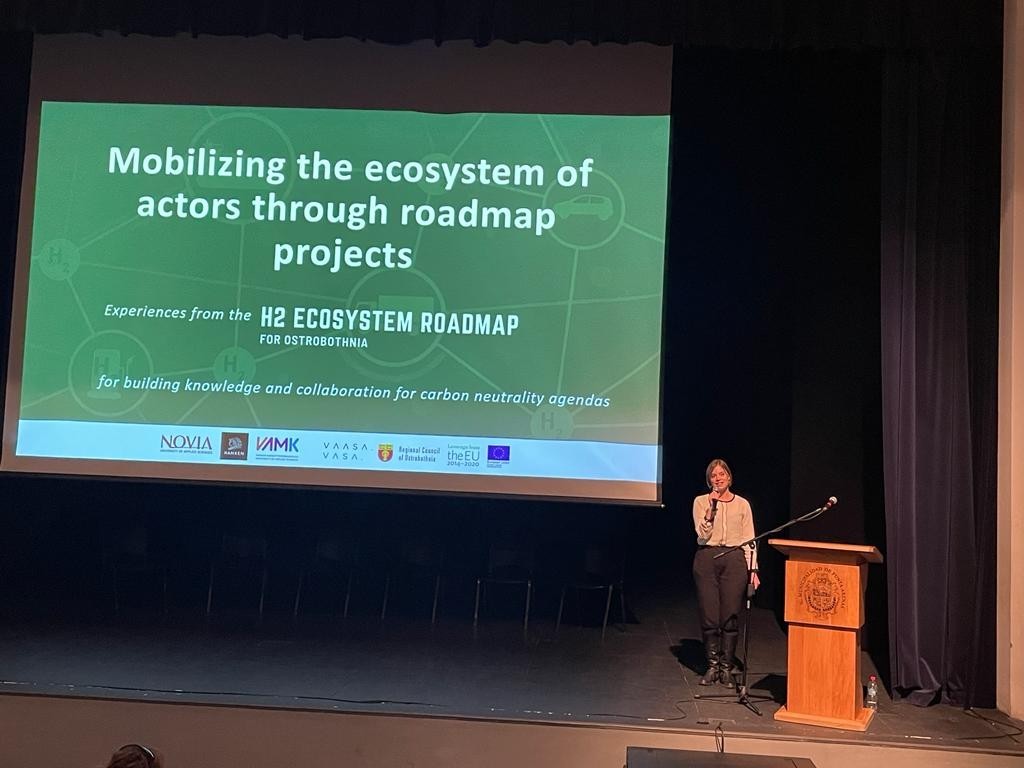 “A key concern for both regions is how the local stakeholders can benefit most from the development of the global hydrogen economy, in terms of environmental sustainability, knowledge development, and economic gain. Important questions that need to be answered include how public policies can support and direct a positive development of the hydrogen economy in the region, what type of activities and structures need to be implemented so that the broader network of stakeholders (the ecosystem of actors) will benefit from the development, and how and by whom can the implementation of these be orchestrated. The experiences from Ostrobothnia of Quadruple Helix collaboration and business ecosystem development were interesting for the Chilean actors and collaboration within this frame was decided to be continued.

Sometimes one needs to travel far to see more clearly the things that are close. The 1-week long study visit to the region of Magallanes clearly proved this old wisdom to be true. Our world is undergoing a massive and complex transformation on many planes. Thus, making sense of this transformation and the specific forces driving it is crucial if we want to lead the change in a more heedful manner. The emergence of green hydrogen and e-fuels on the global green energy transition agenda are two major drivers that we need to understand both urgently and more profoundly. Engaging proactively in their development is timely and much needed. This will only be achieved by mobilizing the ecosystem of stakeholders to join forces and respond to these needs together.”

The IURC Programme constitutes the second phase of the International Urban Cooperation Programme (IUC, 2016-2020) and aims to lead and develop a decentralized form of international urban and regional cooperation in the fields of sustainable urban development and regional innovation. The programme supports pairings between cities and regions of the European Union with their counterparts in six Latin American countries: Argentina, Brazil, Chile, Colombia, Mexico and Peru. In total, the network of cities and regions of IURC Latin America is made up of 24 cities and 20 regions.