On 13th December 2022, officials from Nuovo Circondario Imolese of Bologna (Italy) and Yangzhou (China) participated in an online working session to develop substantive cooperation areas between the cities. NCI, Bologna and Yangzhou are partner cities in the IURC China programme. In December 2021, the two cities signed the Memorandum of Understanding to solidify the cooperation through a joint Green Design Centre in the field of green city and sustainable urban development. Yangzhou city brought the stakeholder of the Yangzhou university, which was partner in the NCI, Bologna – Yangzhou Green Design Centre. Delegate of NCI, Bologna participated in the meeting on behalf of the municipality of NCI, the University of Bologna, the Academy of Fine Arts of Bologna, and Imola International Music Academy (Fondazione Accademia Internazionale di Imola). 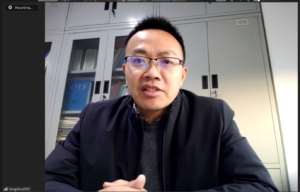 Mr. TAO Xiaojun, Director of the Division of Planning in Yangzhou DRC expressed the hope for deeper cooperation in joint research, knowledge exchange and joint project in the future. Delegates from Yangzhou University shared the information and current international cooperation programs at the university, highlighting the core research in agriculture and horticulture, food and environment, grand canal and cultural heritage, and low-carbon technologies. Universities in NCI, Bologna are invited to join the academic partner network, collaborate in research, and exchange faculty and student with Yangzhou university.

Mr. Marino Cavallo, Head of the Research, Innovation and EU project management Service in Bologna Municipal Government stressed the importance of the triple helix approach of the city´s international cooperation, with correlated actions from the municipal government, universities and enterprises. He shared the city´s features in industry and agri-food sectors with rich cultural heritage. Sustainable and green city is the priority of urban development, correlating with sustainable tourism development.  NCI Bologna´s involvement in IURC focuses on Nature-based solutions & green cities, smart cities with cultural and ecological aspects, green design and automotive research. Yangzhou university is invited to set up a representative office in NCI, Bologna and unravel joint activities in design, research, events and exhibition. Based on the successful cooperation at the Yangzhou International Horticulture Expo, the topic of green & healthy cities, garden & landscape, and environment & culture are the connections between the two cities. Both sides will define concretely the cooperation scope, resource, budget and activities to be implemented in IURC China.

The two cities agreed to share each other´s presentation and Yangzhou University will draft a proposal for concrete joint actions with NCI Bologna. There will be a follow-up working session to discuss implementation of Green Design and Innovation Centre, and both sides will involve relevant stakeholders to participate.