On the morning of 25th October 2018, the direct connection for freight trains from Mannheim to Chongqing in China was officially put into operation. This is one of the key pilot projects of the Mannheim – Chongqing cooperation within the International Urban Cooperation (IUC) project.

At the ceremony, Dr Peter Kurz, Mayor of Mannheim, expressed his gratitude to the European Union for the support to the pilot project. He stated that the EU’s political support – as well as the IUC team’s contents and coordination support – was crucial during several rounds of negotiations in China and Europe. Dr. Kurz welcomed especially the IUC’s triple-helix approach allowing the city authorities to involve key stakeholders from several local economic sectors.

Speaking on behalf of the European Commission, Mr Charles White, Senior External Advisor of DG REGIO, stated that “Establishing a direct cargo railway line between Mannheim and Chongqing is a great example of how to implement the UN Sustainable Urban Development goals and the European Union’s Urban Agenda at the local level. Moreover, it is a classic European best practice example of the way local authorities can achieve these goals in partnership with civil society – in this case with the local business community.“

Mr White expressed his congratulations to Mannheim’s city administration under the guidance of Mannheim’s Mayor Peter Kurz and especially of the First Deputy Mayor Christian Specht. Mannheim’s international relations team made crucial efforts to realize the vision of linking Mannheim – a well-known European transport axis – with Chongqing, one of China’s most important transport hubs.

Mr White stated that this project shows that cities can be agents for change, by bringing concrete solutions to bear upon common challenges. He said that this is a pilot project which supports the local economy and achieves the reduction of both the traffic congestion and the CO2 emissions caused by traditional freight transportation methods.

Mr Wu Cunrong, First Vice Mayor of Chongqing City, stressed the importance of the Mannheim-Chongqing axis for closer connecting China and the European Union. He expressed Chongqing’s commitment to smoothing freight formalities alongside the route through dialogue with bordering countries. Mr Wu also discussed the possibilities of making Mannheim a hub for collaboration with Chongqing and South West China, including join projects in other areas relevant for the sustainable economic and urban development

Also, Mr Wang Shunqing, the Consul General of China in Frankfurt, had come to Mannheim to join this occasion. Mr Wang underlined the strong commitment of Mannheim authorities for making the railway connection with Chongqing a reality. He also acknowledged the vision and commitment of Chongqing authorities to involving the Chinese stakeholders in the project.

From the multi-modal port of Mannheim, the first freight train – containing 41 containers á 40 feet – then set off to China, in a travel over approximately 11,200 kilometers.

The train travels through Poland, Belarus, Russia and Kazakhstan. According to the logistics company Contargo, the transport time of goods between Mannheim and China is significantly reduced due to the new train connection. The freight train takes about 17 days, while at least 35 by ship. The train is thus an attractive complement to maritime transport and air freight.

The city of Chongqing is located in the interior of the upper reaches of the Yangtze River. It is the start and finish point of the Trans-Eurasia Express, which connects China with Germany. 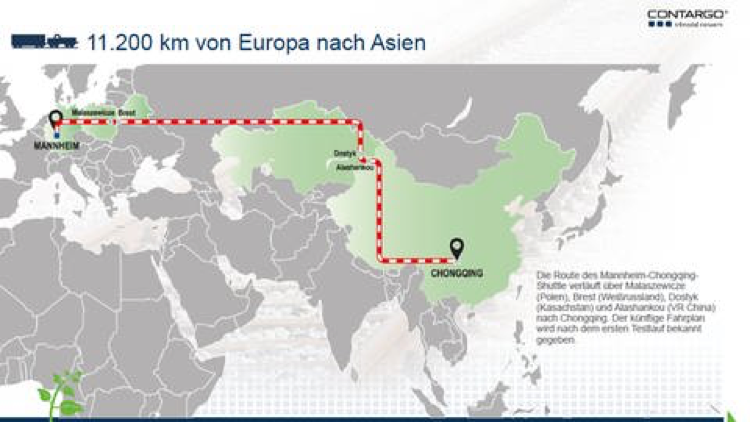 Mannheim and Chongqing joined the IUC Asia programme as pilot cities of 2017. Since the first exchange in June 2017, the two sides have agreed to foster cooperation in areas including the setting-up of new railway connection. Within the framework of the IUC programme and through the support from the project team, the two cities have exchanged high-level official visits and maintained in-depth communication.

As early as July 2018, representatives of the City of Mannheim and representatives of a logistics company from Chongqing (Yuxinou Logistics Company Ltd) signed a Memorandum of Understanding, with the focus to “foster collaboration in the field of logistics and freight transport”.

Dr. Peter Kurz, Mayor of Mannheim, said that such a connection would benefit both cities enormously. He emphasized that Mannheim, as a “central transport hub for water, road and rail transport, is one of the most important logistics and business locations in Europe”.

Electronic locks are designed to provide end-to-end monitoring and tracking, including daily delivery of information to customers. According to the city of Mannheim, there is a great need for a direct rail connection to China in the Rhine-Neckar metropolitan region. That have resulted from discussions with commercial enterprises and interest groups.

Click the link to watch the video of the train launch ceremony and interviews.

Credit: the source of part of the article is from: SWR news